"Pure style is my way of life... a blueprint for living in the 21st Century"
february blog
17 February 2020

Yesterday the garden became a little Venice as the storm rain poured down and created watery canals between the central beds. To say it was sodden was an understatement as I took refuge in the office and tidied up the computer desktop rather than the garden prunings.

This morning the ground has swallowed up the excess water but the grass still feels like the unstable mud flats you get at low tide by the river. Squelchy, but at least the narcissi are poking through , the little clump that is well over 10 years old has sprouted again and is about to burst into bloom. This time last year the buds were shut tight and the plants half the size in height. Its been another exceptionally warm winter , as we all know.

Very excited to come across a pot of narcissi actually flowering; theyre bulbs from inside that I put out after flowering over a year ago and forgot to dig into the ground. Love the accidental surprises that the garden yields.

I skipped swimming to garden but its another form of exercise, sweeping, cutting, loading up the wheelbarrow and trundling it to the heap behind the fencing at the bottom of the garden. After an hour, plus aching arms from stretching upwards to prune wildy unwieldy Madame Aflred Carriere rose (a glorious puff of white petals later on in summer) its time to lay down the choppers and have a break. 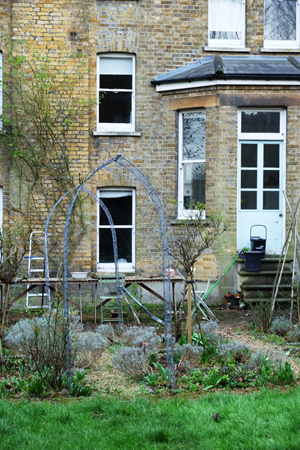